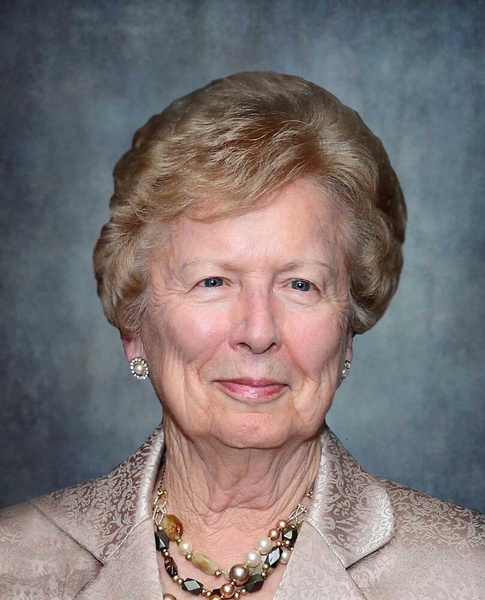 Frances Marie Garner Pugh, 94, of Charlotte, NC, passed away peacefully on Friday, February 25, 2022, at home with family by her side.

Marie was born on October 29, 1927, in the mill town of Randleman, NC, to the late Colon and Iola Kirkman Garner. She grew up with a strong work ethic having worked in the hosiery mill as a schoolgirl while still earning excellent grades with many years of perfect attendance. Marie graduated in 1944 as salutatorian of Randolph High School. In 1947, Marie married her high school sweetheart, Bob Pugh, a U.S. Navy sailor who had returned from serving in the Pacific during WWII. Marie and Bob were married for 58 years until his passing in 2005.

Upon returning from the West Coast to North Carolina after her husband’s honorable discharge from the Navy, the couple settled in Raleigh, where they were blessed by two children, Doug and Joan. As a young mother with scholastics as a core value, Marie enrolled at North Carolina State University when women were less than 10 percent of the student body. There, Marie was invited to join N.C. State’s honor society, Phi Kappa Phi, and was further recognized with the Highest Scholastic Achievement Honor Award for the junior with the highest accumulated GPA. Marie graduated with high honors in English in 1968.

Marie and Bob later moved to Salisbury where Marie taught high school English at West Rowan High School for 20 years. Marie had a big heart for children—the more the merrier—and, upon her retirement, could still be found at school volunteering as a reading tutor for elementary-aged children with learning differences. Marie was a strong advocate for children and demonstrated this throughout her adulthood supporting both the Nazareth Adoption and Foster Care Program and the Children’s Home Society of North Carolina.

Marie was an achiever as a student and teacher, but her intellect extended beyond the classroom. Several early years of secretarial work had taught her financial literacy and independence, and she quickly learned she had a knack for playing the stock market. Marie invested wisely, filed her own taxes until the end, and was known to clip coupons and shop at four grocery stores weekly to get the best deals.

Marie’s family lovingly joked that the “G” in her middle name stood for “go,” as she was always up for an adventure. Marie and Bob lived in Seattle, Greensboro, Burlington, Raleigh, and Salisbury and enjoyed an exciting life of cross-country road tripping, cruising, and traveling abroad. Marie’s passport was full. Any new destination was fair game, including Russia during the Cold War, Alaska, Hawaii, and most of the 50 states, Caribbean islands, and many European nations. Her philosophy was to see the world while she could, and she and Bob worked hard to retire early to accomplish this dream.

When stateside, Marie could be spotted daily on the golf course and was an avid, competitive bridge player. In retirement, you could find her reading thrillers, traveling, perfecting her putting stroke, hosting her many lifelong friends around the bridge table, or at Milford United Methodist Church where she was a lifelong member. She was a “can do” lady who loved life and lived it to the fullest.

In her later years, Marie continued life’s adventure when she moved to Charlotte to live with her granddaughter’s family. “Gran” was adored by her great grandchildren and became a special part of their daily lives. Gran’s door was always open, as was her candy dish, with plentiful popsicles and Lifesavers for the neighborhood children. Marie particularly loved passing out sweets and admiring the costumes of trick-or-treaters at Halloween.

Marie is survived by her granddaughter, Elle Marie Allen, and her husband Todd, and by her two beloved great-grandchildren, Kinsley and James Allen, all of Charlotte. As well, she is survived by two grandchildren in Alpharetta, GA, Ari and Ana Kazemi. Also surviving are her sisters-in-law Opal Garner of Randleman, Jewel Lamb of Franklinville, and Donna Dennis of Kennesaw, GA. Many special nieces and nephews survive her. Marie was preceded in death by her late husband, Robert Fitzugh Pugh, and both of her children, Douglas Robert Pugh and Joan Marie Pugh Kazemi. Marie was the last surviving Garner sibling and was predeceased by her sisters Bernice McDonald, Louise Edmonds, and Peggy Hall, and by her brother Jack Garner.

The family would like to thank Dr. Joseph Mueller of Charlotte and staff for going above and beyond to ensure Marie achieved her lifelong goal never to be hospitalized. The family would also like to extend heartfelt gratitude to the caregivers with Visiting Angels and Novant Hospice for the exceptional love and care Marie was shown in her final days. The family gives thanks for the love and support shown by Myers Park Methodist Church parish nurse, clergy, and congregation.

A graveside service will be held at 3:00pm Sunday, February 27, 2022, at Randolph Memorial Park with the Reverend Steve Combs presiding. Arrangements are in the care of Pugh Funeral Home. In lieu of flowers, the family requests that memorials be made to Nazareth Child & Family Connection, PO Box 1428, Rockwell, NC 28138 or The Children’s Home Society, PO Box 14608, Greensboro, NC 27415, or Milford Hills United Methodist Church, 1630 Statesville Blvd, Salisbury, NC 28144.

Pugh Funeral Home in Randleman is serving the Pugh family.

To order memorial trees or send flowers to the family in memory of Marie Garner Pugh, please visit our flower store.