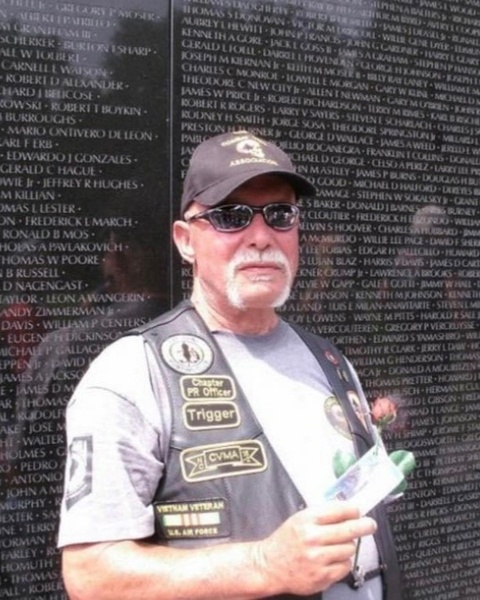 Ken, at age 76, passed peacefully with his wife and sons by his side at Cone Hospital on September 22, 2022. Ken had a full and interesting life but had been in declining health for the last six years.

Ken is predeceased by his parents Benjamin & Lucille Yarberry. He is survived by his wife Phyllis “Shug” Briles, his sons Ken Briles Jr. (Christina) and Ryan Moore (Kristine), and the sparkles of his eyes, grandchildren Hannah Briles and Case Moore.

Raised in High Point, NC, Ken joined the United States Air Force after high school and was deployed to Vietnam. He served as a Communications Center Specialist (Crypto Ranger).  Leaving the Air Force, Ken returned to Guilford County where he worked for the county Emergency Medical Services in many various positions. He retired from Guilford County EMS as a shift supervisor.

After retiring, he and his wife rode motorcycles through 45 states and 6 Canadian provinces. Ken was small in frame but lived a large life. His friends knew him to be quick of wit, and a levelheaded friend who always kept a steady hand on the tiller. His passions were old cars, especially Chevrolets, horses, motorcycles, deer hunting, and traveling.

Due to his love of fast muscle cars, he joined the Triad Chevy Club as 1965-1968 Corvettes were always his favorites. A man of many skills, Ken purchased a 1966 450 HP red Corvette convertible that had been completely disassembled and brought it home in boxes. Restoring the car and showing it was one of his favorite things. He received many awards with that car including the coveted Bloomington Gold for restoration accuracy, and the National Corvette Restorers Society Top Flight Award, of which only 17,864 cars have ever accomplished.

Ken was a Flat Fork Hunt Club member in Wadesboro, NC for over 50 years. Ken spent many a month there at the deer palace with his lifelong friends. As Ken’s health declined and he was not able to hunt, he was still welcomed and cared for at the club when he went out to spend time there.

Ken’s love of our great nation & motorcycles led him to join the Combat Veterans Motorcycle Association®. This organization gave him the opportunity to help veterans and provide fellowship with brothers and sisters of the armed forces, all while riding motorcycles. He held various leadership positions at the chapter level and as the NC CVMA® State Representative for almost 3 years.

Ken was an avid horseman for many years, raising and riding paint and quarter horses on his Little Pond Farm in Troy, NC. When his health started to decline, he and his wife moved to Asheboro.

One of his proudest moments was when his sons honored him and his service with a brick at the Triad Field of Honor Veterans Memorial Kernersville, NC.

His life will be celebrated on Sunday, October 9 at New Life Family Fellowship at 2PM, located at 1354 E. Allred St, Asheboro, NC 27203. His family will welcome friends with refreshments in the fellowship hall following the service.

The family will have a private interment at Salisbury National Cemetery on Monday, Oct 10 with full military honors.

In lieu of flowers, the family is asking for donations to the CVMA Auxiliary Scholarship fund at www.combatvet.us (there is a green DONATE icon) or the National Kidney Foundation www.kidneyfund.org.

To order memorial trees or send flowers to the family in memory of Kenneth Wayne "Trigger" Briles, please visit our flower store.