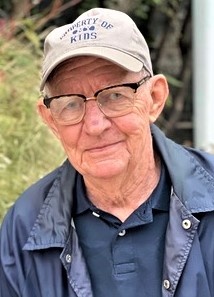 At 5:05PM, August 6, 2022, Jerry Lautenschleger passed peacefully in his sleep from our lives to his Heavenly forever life.  He will be remembered as a great dad, loving grandfather, and an awesome man. Heaven gained an angel with a soul who’s time spent on earth was filled with joy, passion and love for his family and friends.
>
> He was greeted upon entry by those who had gone before to be part of the preparation for his arrival.  The first in line with joy in her heart was his wife, Eldora Lee Thompson Lautenschleger, his “sugar bear”.  They were joined by his mother, Lillian  Barnes Lautenschleger Pierce;  father, Harry Lautenschleger; sister, Betty Lou Lautenschleger Thomas; and his niece, Debbie Thomas. There were in-laws, friends and work associates who also lined the pathway as he proceeded to his mansion and heavenly garden filled with an abundance of beauty.
>
> Those remaining to celebrate his life and memories are his loving and devoted children, Loretta Lautenschleger Rivera (Greg) and Samuel Lautenschleger (Jeannie); precious grandchildren Drake Rivera (Emily) and Hunter Rivera (Mia Barkel); brother Roy Lautenschleger (Donna) and nieces, nephew and dear friends whose lives were touched by his life and love.
>
> Affectionately known as PoPo, his life of 81 years brought joy and happiness not only to his immediate family but also to those he called family through the years.  Together we experienced so many firsts - new foods, snow skiing, travel - Jamaica, New Orleans, Colorado, Oregon, Venezuela, Florida, Ohio, Niagara, dog-sledding, snowmobiling, kayaking, biking, camping, fishing, amusement parks, zoos, aquariums, Navy ships, Airforce museum, Penn State Penitentiary, Milburn Orchards, raceways, ATVs, sand dune driving, beach walks, sunsets, hot tubs, Uno, dog walks and evenings listening to epic country music that will never go out of style.  While our world is smaller without you, you’re earthly world was fulfilled. We will “c-ya later” when God’s timing is right. In the meantime, make sure that you explore all that Heaven has to offer so you are ready to take us on out of this world adventures when we reunite.
>
> Visitation for friends and family will be from 9AM - 10AM on Sunday, August 14, 2022 at Pugh Funeral Home followed by a graveside service at Randolph Memorial Park at 11AM with God’s anointed, Donnie Presnell presiding.
>
> In lieu of flowers, donations can be made to Tri-State Warriors Baseball Assn, 23 Cannon Run, Newark, DE 19702, a non-profit that supports the sport of baseball for which his Grandson’s have a passion.

To order memorial trees or send flowers to the family in memory of Jerry Lautenschleger, please visit our flower store.