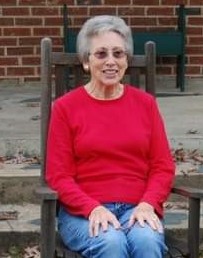 Janet Pugh Johnson, 81, of Millboro, North Carolina passed away on May 21, 2022, after a long battle with Alzheimer’s disease.

Janet was born on March 9, 1941, to Joseph Henry and Virginia Dee Aldridge Pugh in the small community of Millboro. Affectionately known as “Little Tot” by her family as a child, “Sugar Babe” by her husband, “Mama” by her children, and Gran-Jan by her grandchildren, Janet lived in Millboro all her life and never wanted to live anywhere else.

Janet met the love of her life and sweetheart, Jessie Thomas “Tommy” Johnson at Grays Chapel High School. After she graduated from Grays Chapel in 1958, she went on to study education at Elon College. After her first year at Elon, she and Tommy decided they couldn’t live without each other, and they married on August 23, 1959. They started their family, and Janet finished her degree at Elon while raising her first child and pregnant with her second.

After receiving her Bachelor of Arts from Elon in 1963, Janet started her first job at Grays Chapel School, kickstarting a decades long career shaping the lives of children. After teaching in the classroom, Janet attended UNCG and obtained her Master’s of Education in school counseling in 1971. She and Tommy continued to grow their family and had two more children. After spending 23 years as a school guidance counselor at Trinity High School, Grays Chapel Elementary School, Franklinville Elementary School, Liberty Elementary School, Coleridge Elementary School and Eastern Randolph High School, Janet earned a license in school administration from North Carolina A&T and subsequently went on to serve as the Randolph County Schools Director of Personnel and later as a teacher recruiter and mentor and Drop-out Prevention Specialist. After retirement, she was called back on occasion to fill temporary counseling positions in various schools. Janet had a true passion for education and for doing what was best to serve and educate the children of Randolph County. She ran for and served on the Randolph County School Board for 8 years.

Although her career was most rewarding, retirement with her husband was even better. They were able to spend a number of years traveling and spending time with their four grown children, and nine grandchildren.

In addition to being the greatest mother any child could ask for, Janet had personal interests that ran the gamut. She was a lifelong learner and loved to read all genres of literature. Janet was also passionate about her faith, animals, the environment, and education. She had a great love for music and was an accomplished pianist. Family sing-a-longs were commonplace in the house when her children were young. She also played the piano and sang in the choir at her church, Grays Chapel United Methodist.

Janet was somewhat of a closet biologist. She originally wanted to pursue a career in medicine before turning to education. A favorite memory of her children was “nature walks” where she taught them how to identify and name plants, leaves, animals, reptiles and insects. She was adamant that we are all God’s creatures, and that we should treat each other as such. She was accepting of all people and lifestyles. Selflessness and generosity were just two of many wonderful traits that highlighted her personality. Janet was a hard worker and a resilient figure in the face of adversity, and she was an example to her children and family of the good and kindness that we all need in our every day lives.

A graveside service and celebration of life for Janet will be held at Grays Chapel United Methodist Church on Saturday, May 28 at 10 a.m. with Rev. Alanda Harris officiating. The family will receive friends in the church fellowship hall after the funeral.

To order memorial trees or send flowers to the family in memory of Janet Pugh Johnson, please visit our flower store.

Following the graveside service in the church fellowship hall.