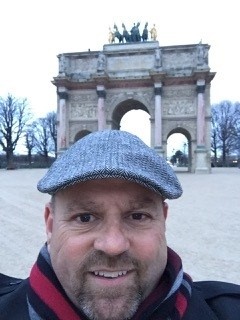 James Ralph Henderson, 58, of Stokesdale, passed away unexpectedly on July 16, 2022, at his residence.

He was born January 25, 1964, to Colleen Moon Henderson and Rufus Mae Henderson, the youngest of six children, in Asheboro (Randolph County), NC.

James attended North Carolina State University in 1982. In May 1984, he joined the US Air Force, one of the youngest to achieve Staff Sergeant, receiving an Honorable Discharge in March 1988 as Staff Sergeant. James joined McDonnell Douglas in Long Beach, CA, in April 1988, through its transition to The Boeing Company. After 26 years, he left Boeing in January 2014 to take on other opportunities in aerospace manufacturing at Arrowhead, LisiCorporation, and in 2017, moved to HAECO America’s in Greensboro, NC. James joined Barrier1 Systems (security gates, barriers, and nets) in 2021, achieving his dream of being President of a manufacturing company.

From Asheboro, NC, to Merced, CA, to Long Beach, CA, to Macon, GA, back to Southern California, and finally Greensboro (Stokesdale), NC friends that are family are counted among those who survived him. His “West Coast” Family, Sharon Miles, Shawn Pocius and the Metter Family, Gail, Brian, Jessica (Scott), and Jennifer (Chris).

A man who knew no stranger, he served and loved his country with pride; James believed hard work, dedication, education, and a choice made for personal responsibility and excellence could make the impossible, possible. He was loved, respected and will be missed by the many he worked under, supervised and mentored.

To his family of “girls,” he was a hero, friend, father, husband, and anchor; we are well-loved.

Always ready with a smile and story, a Celebration of Life will occur later.

On-line condolences may be made at www.pughfuneralhome.com

No flowers, please. If you wish to send a memorial gift, he received assistance from the American Red Cross <https://www.redcross.org/donations/your-gift-matters/military-families.html> Support for Military Families while in the USAF. He would be honored by your support of this organization.

To order memorial trees or send flowers to the family in memory of James Ralph Henderson, please visit our flower store.