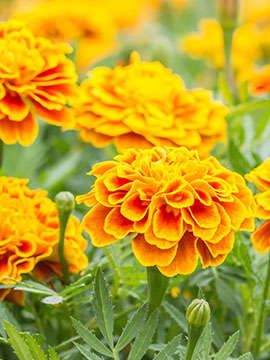 A life so beautifully lived deserves to be beautifully remembered. Henrietta Luther Menius, 95, passed away peacefully on March 4, 2021. Henri, as she was lovingly known, was born on September 8, 1925, in Liberty, NC to James Clyde and Esther Aiken Luther. She grew up in Liberty and attended the public schools there. She earned a Bachelor of Arts degree in psychology from the Woman's College in Greensboro, N.C. in 1946. After graduation she was employed by Myers Department Store in Greensboro. Her marriage in 1948 to the late Dr. John Menius, Jr. brought her to Asheboro which became their home. Their marriage was filled with a deep, faithful love for each other. They built their lives together around their children. She was devoted to her husband and family and taught them by example how to live a life centered on service, grace and love. Jack Menius was fortunate to have Henri as his life's partner. Many times, he said that "marrying your mother was the wisest thing I ever did" even though he had to drive that winding Old Liberty Road so many times during their courtship. He referred to her as "the coach" because she was in charge and maintained the household according to her standards. Henri was a member of First United Methodist Church where she was active in Women's Circle activities and Alter Guild. She had a strong religious commitment and faithfully served in all areas of the church as needed. Henri's passion for the Word of God led her to pray and read her Bible daily. In addition, Henri was very active in Book Club, Friends of the Library, and Garden Club. She took pride and enjoyed working in her yard. Friends passing by could always find her with her wheelbarrow picking up sticks, on a ladder trimming the hedge, blowing leaves, or mowing. Her sons were particularly fortunate to have had her as a mom. Every day began with a hot breakfast and ended with a tuck in and a kiss. If love can be measured by chicken salad, she would come out on top! The boys owe their early education to their mother. She not only enforced homework, she encouraged them when motivation faltered. Henri and Jack were involved in everything their boys did. A favorite family activity was skiing trips to Beech Mountain. Henri never met a stranger. Her sweet smile warmed all those she encountered, and her kind and welcoming demeanor were ever present. Henri left a positive impact wherever she went. She loved her friends dearly and was loved in return by them. Henri was the one who most often hosted family gatherings and holidays. She looked forward to every family dinner she spent with them. In addition to her parents and husband, she was preceded in death by one brother Jim Luther, sisters Pat Williams, and Rachael Hardin. She is survived by her sons, Dr. John Menius III (Joy) of Asheboro; David Menius (Donna) of Ocean Isle Beach; Tom Menius (Megan) of Asheboro. Grandchildren, Alexander Menius (Maegan), Reverend Meredith Menius, Luke Menius (Lisa), Rachael Menius Burgess (Dan), Alison Menius Herman (Matt), Marianne Menius (fiancé Derek Schlickeisen). Great grandchildren; Eleanor and Elijah Menius, Harper and Stella Menius, Lucille and Jack Burgess, and Cole Herman. Nine nieces and nephews. Although her granddaughters Rachael and Alison regret that they were unable to be with their beloved Grandmother due to COVID travel restrictions, they have cherished their time with her via FaceTime visits this past week. All her grandchildren and great-grandchildren will always treasure the relationship they shared with her and will carry on her legacy through the life lessons they have learned from her. Her memory will forever live in their hearts. The family would like to thank the staff at Mountain Top Living Apartments. We are also grateful for her caregiver, Donna Gallimore. In lieu of flowers, memorials can be made to First United Methodist Church (224 N. Fayetteville St. Asheboro, N.C. 27203) or Randolph County Public Library (201 Worth St Asheboro, N.C. 27203), two ministries that were special to Henri. Funeral Service will be Sunday March 7 @ 2:00pm at Pugh Funeral Home Chapel in Asheboro. Officiating will be the Reverend Lynda Ferguson of First United Methodist Church and Meredith Menius, MDIV. of Ardmore United Methodist Church. The service will be live streamed on the Pugh Funeral Home Facebook page. Interment will be in Oaklawn Cemetery. Due to COVID-19 restrictions, please wear masks and observe social distancing.
To order memorial trees or send flowers to the family in memory of Henrietta Luther Menius, please visit our flower store.