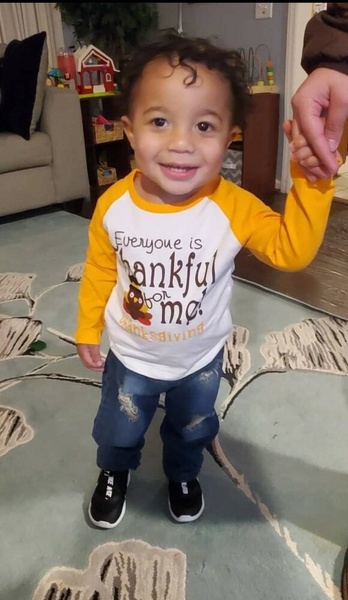 Charlie "Zayden" was sent to us from Heaven on May 5th 2020 but God needed him to return early. On March 18th 2022 he entered the gates to his heavenly home.   "I asked the lord to give me this boy and he has granted my request. Now I am giving him to the lord his whole life. And they worshiped the lord there. " 1 Samuel 1.

He was also known as Bubba, Charlie Boy, Zaebae, and Zayden Bayden. Zayden as a beloved son, brother, grandson, and friend. Zayden was the light of our world, and not just ours but everyone he met. He was always full of life, laughs, fun and love. He was our tractor loving, 4 wheeler riding, water playing little boy. When he wasn't riding, playing in water or outside, he was playing ball with his bubba, singing and dancing with his sisters or cuddling anyone who would let him. He sure had everyone wrapped around his little finger, but Pawpaw was undeniably his favorite. It didn't matter the day or time, he and pawpaw were into something and never stopped. If he wasn't with pawpaw, he was making mischief and tiktoks with his sisters. He was his momma's curly headed, brown eyed, little boy full of love and laughter that was an answer to her prayers. Yet his life was short, he impacted all the people who came in contact with. God allowed so many to see his love and light radiate through Zayden's bright smile or contagious laughter. Despite the multiple battles he faced in his short little life, he continued to spread joy and love everywhere he went. When God called him home, we were not ready but stand fast in our faith and trusting that Gods plan is greater than ours could ever be. Although the family is left behind to grieve, Zayden has been made whole.

The family will receive friends on Thursday, March 24, 2022 from 11:00 am-12:45 pm at Pugh Funeral Home, 437 Sunset Avenue in Asheboro.  Funeral service will follow on Thursday at 1:00 pm at the Pugh Funeral Home Chapel with Lucas McCaskill officiating.  A private burial will be held at Asheboro City Cemetery.

To order memorial trees or send flowers to the family in memory of Charlie Zayden Millikan, please visit our flower store.