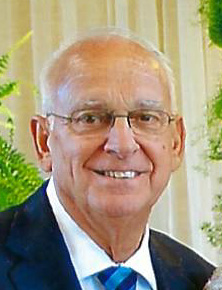 Charles Wade Bonkemeyer, age 81, went to his Heavenly home on Thursday, April 15, 2021. His wife of 60 years, 6 months, five hours and 25 minutes, Linda, and his youngest daughter, Christi, were by his side. Charles was born on January 21, 1940 to Lucian and Corda Underwood Bonkemeyer. He graduated from Asheboro High School in 1958. Upon graduation he went to work for his family's business, Bonk's Cleaners. Charles was fondly known by many as "Mr. Bonk's." He always had a kind word and sweet smile for everyone he met. Charles loved his family dearly and had many cherished friends. He was a selfless man of honesty and integrity and always led by example. He loved the Lord, was certain of his salvation and looked forward to Heaven! He was a member of Giles Chapel United Methodist Church and attended there throughout his daughters' upbringing and later served for several years as the Sunday School superintendent at Neighbor's Grove Wesleyan Church. He most recently attended C4 Church in Asheboro. His hobbies included working in his yard, walking and playing Rook. However, his greatest joy was watching his grandson, Ben Bunting, play baseball. Charles was also so very proud of his four great-grandsons. He was preceded in death by his parents as well as his brothers, Bobby Bonkemeyer, Edward Bonkemeyer and Donald Bonkemeyer as well as his sister, Loretta Bonkemeyer Williams. Charles is survived by his wife, Linda Bonkemeyer, daughters, Sharon Sheppard (Tony), Christi Bunting (Steve). Grandchildren, Erin Pierson (Adam), Ben Bunting (Allison), Megan Guillen (Mark) and Lindsey Brock. Also great-grandchildren, Alec Pierson, Parker Pierson, Asher Bunting and Matthew Guillen. Sisters, Shelba Laughlin (Malcolm) and Lois Rumbley (Ray) and five nieces and three nephews. Visitation will be Friday, April 16th from 5:00-7:00 PM at Pugh Funeral Home of Asheboro. Funeral service will be Saturday, April 17th at 2:00 PM in the Pugh Funeral Home Chapel with the Rev. Wes Jones officiating. Burial will follow in Randolph Memorial Park. COVID guidelines will be followed. The family requests memorial donations be made to: Hospice of Randolph County, 416 Vision Drive, Asheboro, NC 27203.
To order memorial trees or send flowers to the family in memory of Charles Wade Bonkemeyer, please visit our flower store.